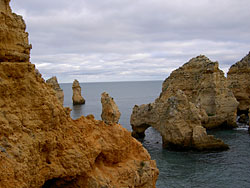 If you are anywhere near Lagos you must visit Ponta de Piedade. Ponta da Piedade is a stunningly beautiful section of a coastline with a nice lighthouse from where you can make boat tours to the natural caves. The promontory of Ponta de Piedade is a fantasy landscape of caves, grottoes and sea arches that nature has sculpted from the cliffs over thousands of years.

Undoubtedly the best way to appreciate the beauty of Ponta de Piedade is from the sea. There are numerous small boats that for a small fee will take you around the rock pillars, through the natural tunnels and into the grottoes. The water is wonderfully clear here and with the bright Algarve sunshine filtered through the holes and fissures in the rocks and reflecting off the water the effect is magical. Each rock formation has been given its own name over the years – the Camel, the Kissing Couple, and the Sphinx. If you prefer to stick to dry land , from the cliff top by the lighthouse, you can descend the steps – all 182 of them! to sea level. The natural beauty of Ponta de Piedade is complemented by the interesting bird population that nest on the rock islands just off shore.

Boat trips to Ponta de Piedade are available from Lagos and from Portimão. 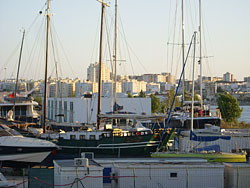 Portimão traces its origins back to a small trading port of the Phoenicians, Greeks and Carthaginians. Some historians have indicated that the place was originally the famous Portus Hannibalis named by the famous Roman general, Hannibal Barca. During the following Moorish occupation they renamed the place “Burj Munt”. Located at the mouth of the River Arade it provides a natural harbour and has at times been known in its past as a home for smugglers and pirates. The river also provides the sea access to the up-river ancient city of Silves which was once the capital of the Algarve during the Moorish occupation. 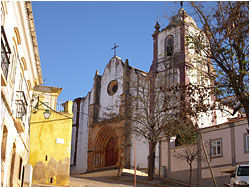 Silves, picturesquely situated above the River Arade where its castle looms large, dates back to the Romans. The castle is the Algarve’s finest and dominates the old Moorish capital, providing the streets with cool shade.

Historically minded tourists will appreciate the city walls and four-arched bridge as well as the castle’s interior and archaeological museum.

For more photos of the area please visit our photo gallery.